India vs New Zealand: Team India’s star all-rounder Hardik Pandya was dismissed in a controversial fashion in India vs New Zealand third ODI at Hyderabad’s Rajiv Gandhi International Stadium, Wednesday. A massive controversy erupted after a decision by the third umpire left everyone stunned during the match.

A delivery from Kiwi bowler Daryl Mitchell, that seemingly extracted some extra bounce from the pitch, went past Pandya’s bat, over the stumps. It seemed like the ball dislodged bails but a confusion was created when the TV replays showed that there might be a possibility of bails getting dislodged by wicket-keeper Tom Latham’s gloves.

Ultimately, Hardik had to walk back to the pavilion for 28 runs off 38 balls after third-umpire deemed that the bails were disturbed by the ball. Later, videos suggested that the umpire giving Pandya out was wrong as the bails were dislodged only after the ball came off the wicketkeeper’s gloves.

Hardik Pandya’s wife Natasa Stankovic took to Instagram to express her displeasure over the controversial dismissal as she even posted a photo of the incident to prove her point.”There was no bat involved, wasn’t bowled out. So how’s this out?” Natasa wrote in her Instagram story. 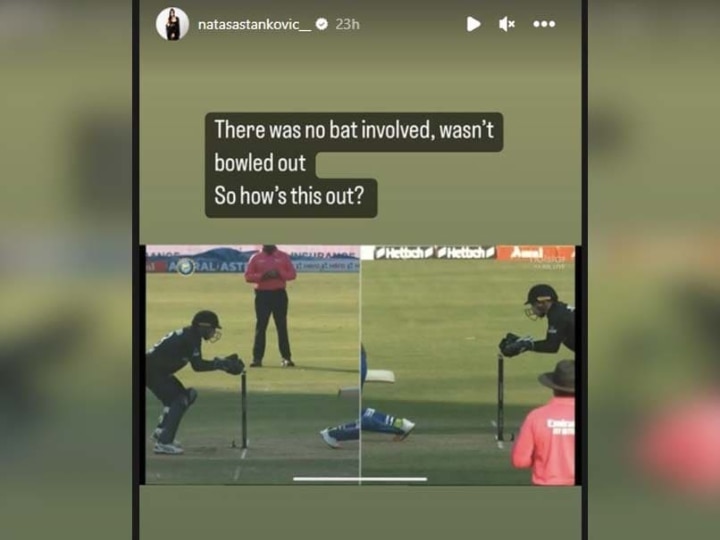 Talking about India vs New Zealand 1st ODI, Shubman Gill’s historic double century helped the Men in Blue beat New Zealand by 12 runs in the first match of the 3-match ODI series, Wednesday. For New Zealand, Michael Bracewell played a remarkable knock of 140 off 78 balls, but his innings went in vain. By the virtue of this win, India now have a 1-0 lead in the series. India vs New Zealand 2nd ODI will be played on Saturday, January 21.

Notably, with a win in 1st ODI, India defeated New Zealand in an ODI game after a long gap of 4 years. Before Wednesday’s win, India had won an ODI game against the Kiwis back in 2009.